The stallions we have used at Westoak Hanoverian Stud for 2020.

L’Espoir achieved the highest ever score at the Danish 35 day test in 2009 with a score of 944, gaining 3 perfect 10’s – for canter and temperament and no score was less than 9. To date only 2 other stallions have exceeded this outstanding result. At the Odense CDI he was champion at the qualifier with 9.1 and 2nd in the final with 8.64. He has competed to Inter 1.His sire is Lord Loxley who was a former Bundeschampion and vice world champion, Lord Loxley’s sire being Lord Sinclair who was also a former Bundeschampion and Grand Prix winner. Both these sires are renowned for producing successful sport horses and approved breeding stallions and state premium mares. His dam is by the former State Stud stallion Warkat, again exceptionally well known for his offspring including the Olympic Gold medallist Wanesuela Suerte. 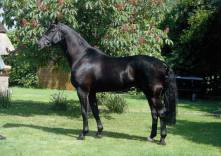 Hochadel won the 2003 Stallion Performance Test in Adelheidsdorf earning a perfect score of 10 for rideability and walk and 9 for his trot. Hochadel passes his striking type and his rideability to his daughters and sons. Hochadel’s sire, Hohenstein I had a very successful career. He was named a Premium stallion at the 1993 Trakehner Licensing in Neumunster, and in 1994, he was the Reserve Champion of his performance test. In 1995, he won the Trakehner Championship in Cologne, and won the bronze medal at the Bundeschampionate in Warendorf. At the age of 6, Hohenstein won at M Level in dressage, and went on to the advanced S Level mastering Grand Prix.
Hochadel’s damline is also impressive boasting the legendary sire, Donnerhall, along with the lines of Lugano II, Woermann, Goetz, and Lugano I. The success of Donnerhall not only as an international Grand Prix horse, but as one of the most successful dressage sires of all time is well known. The sires Lugano II and his full brother, Lugano I are also tremendous. Lugano II’s son, Lungau was the damsire of 4 Olympic horses at the Sydney Olympic Games. The jumper horse, Seven Up, and the dressage horses Brentina and Barclay, as well as the dressage gold medalist, Salinero all had Lungau as their damsire. Hochadel’s FN 2012 Breeding Value is a very impressive 146/93%, and he is well known for improving type. Hochadel has jumped to 55th place in the 2017 WBFSH dressage breeding stallion list and is the highest placed living British based stallion.

Flammengold had a good performance test with high rideability points. South German Dressage Champion 2000 with top mark of 8 at Advanced Medium level. He is very laid back and straightforward to ride. He has won 10 Prix St Georges Classes and 2 Inter 1.

Our sold horses have been qualifying for area festivals, BD and adding to their points all summer. Lovely to hear how these horses are maturing and are a creditto their riders and owners.

Please note our  Hanoverian day will be August 2020, all welcome.