Links to suppliers and people we work with 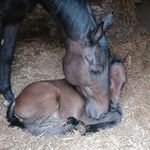 All foals safely on the ground. All fillies this time.

Wish of Westoak By Woiwode out of Tiger lily. (Totilas)

Harriet of Westoak By Hochadel out of Dauphin's Diamond. Dauphin).

Lotus of Westoak by L'Espoir out of Sirtaki. (Sir Fidergold).

Zodiac of Westoak Gold at the Futurity, for dressage with 8.75 for her trot.

Apollo of Westoak born 11th May 2021. Chestnur colt by A Portobello Artist Z out of an Ask mare.

Zodiac of Westoak chestnut filly born 02.04.2021 by Zumanji Decor out of a Damon Hill mare.

Faberge of Westoak backed and ridden away April 2021.

Our sold horses have been qualifying for area festivals, BD and adding to their points all summer. Lovely to hear how these horses are maturing and are a credit to their riders and owners.

Hercules of Westoak By Hochadel out of Tigerlily (Totilas) Chestnut, colt.

By Flammengold out of Ricky Roxane (Ritter Remus)

By Florin of Westoak out of Woodlander Desire (Del Amitiri)